Our Summit day on Makalu 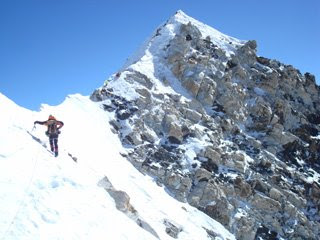 Mick and myself left Base Camp on May 17th however were forced to spend an extra night at Camp 1 before moving up Makalu La because 18th was a very windy day. On May 19th the weather was more settled and we climbed up the ropes to the Makalu La for the third time on the expedition. On the way up we passed the Indian group from HMI Darjeeling coming down off the summit from earlier that morning.

On arrival at the Makalu La Mick was disappointed to find no traces of his Bibler tent that had been left from our earlier visit, it had been blown off the mountain by the strong winds of the last few days. Luckily we had brought with us another tent (Black Diamond Firstlight), this is a super lightweight tent at only 1kg and we hoped would provide us adequate shelter!

May 20th we moved up to High Camp on the edge of the summit icefall at around 7,800m, we were feeling confident as knew if the current good weather held we should have a good chance for the summit tomorrow. After digging out a platform for the tent we settled into the tent to start hydrating and resting before our anticipated departure for the summit in the early hours. During late afternoon we had no problems melting snow with our stove, however as the sun set and temperatures dropped it took longer and longer to get a pot of water ready until it stopped working completely. Eventually we gave up and tried to get some sleep.

The original plan was to leave High Camp at 2am although after coaxing the stove back to life for a few hours we managed to get another litre of water and then while waiting for another brew both Mick and myself fell asleep! We woke when it got light around 5am and thought that maybe it was time to get moving….

Just after 6am we started out from High Camp, we climbed quickly through the icefall and then started on the very long snow slope towards the French Couloir. We experienced wind slab on top of loose snow that made for difficult conditions for Mick breaking trail. It was a relief to finally finish the snow slope and then enter the French Couloir, the route soon heads to the left and onto mixed ground until reaching the corniced summit ridge at 8,300m.

The false summit can be seen along the ridge, this is climbed via a snowy gulley then there is a further corniced ridge to the true summit at 8,462m. We arrived to the summit at 4pm in the afternoon and then after photos and admiring the view we quickly descended to High Camp getting in just after 7pm just as the sun was setting.

We had not planned these timings however as it turned out we were only climbing during daylight hours so we experienced warm & sunny conditions throughout the day with very light winds. We were very fortunate to have Makalu to ourselves there were no other climbers on the mountain that day especially when considering Everest across the valley was heavily crowded on one of the busiest days for commercial expeditions.

On May 22nd we descended to Makalu La where the weather rapidly deteriorated with poor visibility and high winds, we had a cold descent down the ropes to Camp 1. We were pretty tired when on arrival so decided to spend the night and continue to Base Camp on the next day. Getting to Base Camp on 23rd we had to quickly pack our gear as porters had been arranged, after lunch we walked down to Hilary Base Camp. From there we walked to the airstrip in Tumlingtar in four long days. 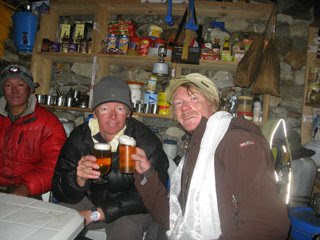 Photo: Roland and Mick back in Base Camp

I would like to thank Jamie McGuinness from http://www.project-himalaya.com/ for providing weather forecasts during our expedition that proved to be very accurate.

Thanks also to Mike Farris from http://www.thealtitudeexperience.com/ for his SMS texts from Everest Base Camp with information on weather forecasts and his plans for summit day dates & timings.

Finally many thanks to our Base Camp crew for looking after us so well, danyibad Dendi Sherpa, Dawa Sherpa, Sonam, Dawa and Pudam.
Posted by www.themountaincompany.co.uk at 06:37