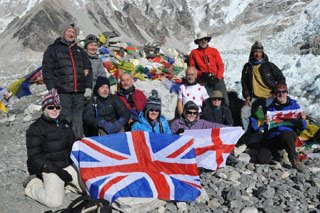 Photo: TMC group at Everest Base Camp in December 2011
On November 29th our Open Charity Challenge group trekking to Everest Base Camp arrived to Kathmandu. Alan Ward was the western leader for this team of fifteen which also included four visually impaired (“VI”) people with one person having no sight.

One of the VIs, David, had already joined two of our treks both led by Alan, in 2007 he trekked to Upper Mustang in Nepal and in 2010 attempted to climb Stok Kangri in Ladakh. David got in touch with us at end of last year with the idea of planning a trek to Everest Base Camp to coincide with his 60th birthday. Of course we were delighted to be able to help him and he also recruited several friends from his walking group Milton Mountaineers and Vitalise Holidays.

In September Alan organised a training weekend for this group in Brecons, this worked well so that the team could get to know each other. From feedback received I gather everyone found Alan’s various presentations and discussions over the course of the weekend very helpful and aided their preparations for the trek to Everest Base Camp.

Based on our experience with organising David’s previous treks in the Himalayas we realised that each VI would require a sighted helper from UK as well as one Sherpa guide to escort them at all times along the trail. After discussing this set-up on their return I understand worked well with Sherpa guides taking the lead during the day due to their knowledge of the route while also being supported by UK helpers. Then on arrival to lodge in the afternoon UK helper would take over showing VIs around the lodge such as dining room, bedroom and washing facilities.

I enjoyed meeting this group on their return to Kathmandu and hearing about how the trek went for them. They experienced good weather with sun every day and also everyone acclimatised well to the altitude (as a result of our tried and tested 14 day trek itinerary!). The feedback I received was they enjoyed staying at the lodges we had carefully selected for them and I gather Zamling in Namche and Mother Earth were their favourites.

Great news that all VIs and helpers plus the rest of the group (apart from one) made it all the way to Everest Base Camp and/ or Kalapatar. This is a fantastic achievement for everyone in the group and is truly inspirational. When they got back in Kathmandu there was a lot of interest by Nepalese media and VIs had interviews with Kantipur TV,several radio stations and also articles/ photos in several newspapers including Republica (see photo below). 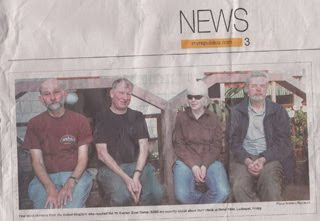 This is a photo of David, Jimmy, Leigh and Terry in Kathmandu a few days ago after successfully completing Everest Base Camp trek in Nepal, it is a really special achievement for them as they are all visually impaired with one person having no sight.

I would like thank Alan Ward their western leader and UK helpers (Diana, Rob, Meg and Emma) as well as the rest of the group who supported VIs throughout their trek. A huge thanks to our Nepalese sirdar, Buddhi Rai, plus the Sherpas (Tenzing, Purna, Mangal, Prem, Kulungman and Uttar) as well as the porters who did a superb job making it possible for everyone to achieve their objective of walking to Everest Base Camp.

Thanks also to Rohan Designs Limited who kindly donated over 20kg of clothing for KEEP’s porters lending bank, Alan brought this gear out with him and shortly after arriving to Nepal visited their office in Kathmandu to hand these items over to them.

The Mountain Company is organising two Open Charity Challenge treks in Nepal for 2012, we have a western led Everest Base Camp group in November and Alan is coming back again to lead our Annapurna Base Camp trek also in November. Please get in touch with us soon if you would like to join one of these groups.
Roland Hunter
www.themountaincompany.co.uk
Posted by www.themountaincompany.co.uk at 18:58 No comments: