A wild snow leopard cub has been caught on camera for the first time in the Bhutan Himalaya. The cub was filmed investigating a camera trap set up by BBC Natural History film crew, they believe that the cub had been left near the camera while its mother snow leopard went hunting. To view some of this video please click on link below:

The same BBC film crew also found tigers living high in the for the first time. The hope is that it may be possible to use the mountain range as a wildlife corridor to link up the fragmented populations across . To view some of this video please click on link below:

The Mountain Company is organising the Lunana Snowman trek in during September/ October 2011. This trail traverses the Bhutan crossing many high passes including the area near where this footage was filmed, for more information on our Lunana Snowman trek

Autumn 2010 newsletter from The Mountain Company

Severe flooding in Baltistan during August 2010 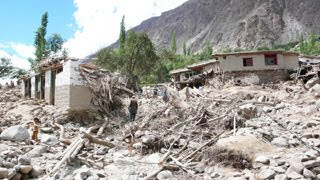 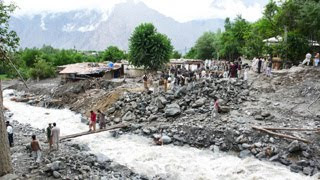 On August 7th, I was at Islamabad airport with The Mountain Company’s K2 & Gondogoro La group waiting for our flight to Skardu. By we were informed this flight was cancelled due to bad weather in Skardu, we were of course disappointed by this delay however little did we know at the time the amount of devastation this weather had caused in the Baltistan region of Pakistan.

Baltistan has suffered from floods and landslides in the past however according to Felix Baltistan Foundation this is the first time has turned into a severe catastrophic situation. Monsoon rains do not usually affect this area in northern the rain shadow effect of the range making a natural barrier to the rain clouds coming from the south and east. However on morning of August 7th heavy monsoon arrived to Baltistan resulting in widespread damage caused by landslides and flooding. In the villages of Talis and sadly fifty one people were killed and throughout the region many animals were killed, trees fallen and crops lost.

The Felix Baltistan Foundation is a non govermental organisation ("NGO") set up by a group of Basque mountaineers in memory of Felix Iñurrategi who died in 2000 while climbing on Gasherbrum II. The Foundation's aim is to help villages in the Hushe valley by improving their living conditions with projects directed towards the basic aspects of life such as education, agriculture and infrastructure.

Shortly after the floods on August 7th several members of Felix Baltistan Foundation provided emergency relief to people of Talis village. They gave out hot meals to families that had been left homeless and in coordination with local authorities and the Red Cross tents were distributed to affected families.

Going forward the Foundation’s objective is to continue their support by helping the villagers face the upcoming winter. The three basic areas in which they will be working on are: food support for next six months; recovery of agricultural lands; and reconstruction of their houses to help protect people against the elements (temperatures can drop to -20 Celsius during the winter).

To find out more about the Felix Baltistan Foundation take a look at their website. Please get in contact with the Foundation if you would like to contribute to their good work in the region. 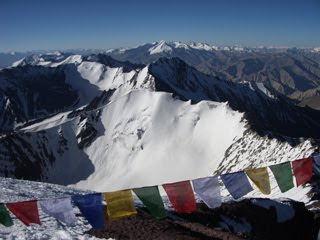 This year Alan Ward led The Mountain Company’s expedition to Stok Kangri (6,123m) in Ladakh northern India, he was helped by our Ladakhi guide Angchok and also our Nepalese climbing guide Shera. Overall the expedition went well with two members of the group summiting and the rest successfully reaching high up on the mountain.

After flying to Leh at 3,505m the team spent three days acclimatising to this high altitude while spending time to explore Leh and the surrounding area. On their second day they visited then climbed to the hilltop gompa and the ruined fort. Next day the team took jeeps to Khardung La, at 5,359m this pass is known as the highest motorable road in the world. Not only is the view impressive but driving up here is helpful for acclimatisation before starting the trek.

Our Stok Kangri itinerary starts from the located on the Zanskar river before entering the , then after crossing Ganda La at 4,983m we make the approach Stok Kangri Base Camp.

On arrival to Base Camp, Alan was informed by the Indian Mountaineering Federation (IMF) representative that it was no longer possible to use the High Camp on the mountain. The reason given was that villagers from Stok were unhappy with the rubbish left at this camp and were worried about pollution of their water supply. While I respect their view on this matter the issue is without using High Camp makes climbing Stok Kangri far more difficult and risky in terms of lack of acclimatisation and forcing a very long summit day. Hopefully in the future a solution will be found to satisfy everyone involved, perhaps by more stringent monitoring of expeditions on the mountain?

Luckily after much discussion IMF granted our group approval to use High Camp due to the fact we had a blind climber in our group however as it turned out the pack animals were unable to proceed to the “higher” High Camp due to snow on the trail.

The team set off for the summit at , on leaving camp they headed up to the glacier which was very wet and slushy underfoot. After making progress climbing the mountain three of the group decided to turn back then two carried on with Shera to the summit. Alan thought that this year the conditions were much more challenging compared to his last visit to Stok Kangri. The view of our summiteers Ian and Paul was that Stok Kangri was more difficult than their previous trips to and .

Congratulations to the whole team it was a great effort given the conditions, I think everyone succeeded in making their own personal altitude records on this mountain.

The Mountain Company is organising an expedition to Stok Kangri in July 2011, please get in touch with us if you would like to join this group.