Part 1: Review of gear and equipment used on a recent expedition to an 8,000m peak (Mt Makalu)

Following my recent expedition to Mt Makalu I thought that it might be useful to review some of the gear and equipment used in order to help others planning a similar expeditions in the future.
I also use most of this gear on trekking peaks like Mera Peak so this discussion should have wider interest (btw Roland is leading The Mountain Company's Mera Peak expedition in November 2009, it is now guaranteed to run and there is still availablity).
I have no sponsors so this is an impartial discussion of gear selected for this expedition and how it performed....click on the links below the photos and you will be directed to the manufacturer's website.
Boots
I brought along two pairs of mountaineering boots: a new pair of La Sportiva Spantiks and an older pair of OneSport (now Millet) Everest.
For the Makalu expedition I was looking for a more technical boot than the pair of Everest boots that I had used on other 8000m expeditions to Everest, Broad Peak and Kanchenjunga. I researched a number of options and finally decided upon the Spantiks. I was certainly not disappointed as they are a superb boot. The Spantiks are very precise and work well on steeper more technical ground.
I was a little concerned that they may not be warm enough for summit day as designed more for a 7,000m peak rather than climbing above 8,000m (especially with no supplemental oxygen). In the end we left High Camp far later than expected and only climbed during daylight from 6am to 7pm. I suspect they may not have been warm enough if we had left camp at 2am as originally planned. 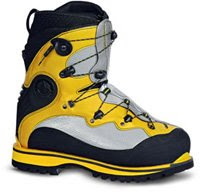 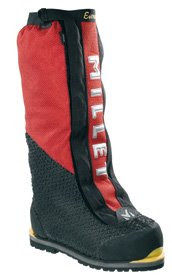 Millett Everest GTX
For the trek from Tumlingtar to Base Camp I used a pair of trail shoes called Salomon Elios.
Tents
Our main tents for the expedition were Mountain Hardwear Trango 3.1s purchased from the Mountain Hardwear store in Kathmandu. These are not the lightest tents at 5.28kg however are spacious and very strong. We left two Trangos at Camp 1 for 5 weeks and they survived the battering from the wind. Inside there are lots of pockets on the sides and ceiling so good for stashing gear and also have a large vestibule for cooking.
The Mountain Company uses Mountain Hardwear Trango 3.1s for all of our treks and expeditions in Nepal. 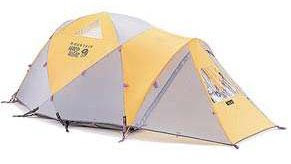 Mountain Hardwear Trango 3.1
On our summit push we used a lightweight tent, Black Diamond Firstlight. In fact we were orginally planning to use a Bibler although this was blown off the mountain at Makalu La and never seen again! The Firstlight tent has the same design as the classic Bibler (Black Diamond purchased Bibler a few years back) although the Firstlight is constructed from far lighter materials, the tent only weighs 1.22kg!
The disadvantage of the Firstlight is that it does not come with a vestibule as standard. It is possible to buy a vestibule as an extra and I would recommend getting as makes cooking easier and provides extra space. It was just possible to squeeze two people into this tent with gear although it was tight.
We were lucky as the weather on our summit push was good with low winds so we did not put this tent to the test, being a lightweight tent I am not sure how well it would hold up to the strong winds such as normally experienced at the Makalu La. 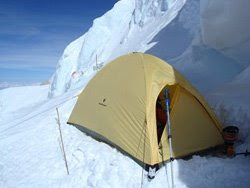 Black Diamond Firstlight at Makalu High Camp
Ice axe
I brought two ice axes: Black Diamond Venom (493g) and Camp Micro 2 (400g). I agree with the description of the Venom on Black Diamond's website "the choice for technical mountaineering routes where performance, light weight and durability are paramount". Overall a superb ice axe that can be used for general mountaineering and also with an agressive pick for steeper ice. 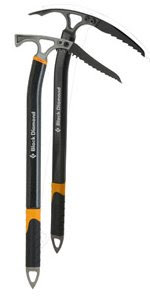 Black Diamond Venom
My second axe is a Camp Micro 2, often called a "third tool". This is a lightweight axe that can be used as a second tool on steeper ice or as a back up in case the main axe is breaks or is lost. My Camp Micro 2 has a hammer rather than an adze so can be used for hammering in pitons.

Camp Micro 2
Crampons
Grivel G12 New matic crampons with antibotts. I have always used these crampons for general mountaineering, they fit securely and are reliable (several others on our expedition experienced issues with crampons falling off…). I strongly recommend getting the antibotts, without these snow that can ball underneath the crampons reducing their effectiveness and significantly increasing the weight.

Grivel G 12s
Trekking poles
The only poles worth getting are the Black Diamond Expedition, these use the simple but effective FlipLocks rather than the unreliable twist mechanism that other companies use. The Expedition poles have two FlipLocks so the poles can be reduced to a size small enough to pack away if not being used.
Harness
I always use the Black Diamond Alpine Bod, this harness has a minimalist design and is super lightweight at 395g. 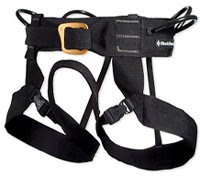 Black Diamond Alpine Bod
Duffel bags
Over the years I have used a number of different types of duffel bags, often I purchased cheaper bags however they would not last for more than one expedition then in 2003 I bit the bullet and bought the more expensive Base Camp Duffel by The North Face. Since then I have used and abused this duffel and is still holding up fine, overall a worthwhile investment.
Sleeping bags
I brought along two sleeping bags, my approach was to use a warmer (and heavier) bag at Base Camp then use a lightweight one on the mountain as I would also be wearing a down suit. I left my bag at Camp 1 so did not have to carry it up and down between Base Camp and Camp 1 during the course of the expedition thus saving a lot of effort.
Both of my sleeping bags are made by Peter Hutchison Designs (PHD), my Base Camp bag is the Xero 1000 Down Sleeping Bag:

Minim 400 Down Sleeping Bag
Down clothes
I used The North Face Nuptse jacket for the trek and also for time at Base Camp. I have never been cold while wearing this jacket and is not too heavy so often carry in my day pack. 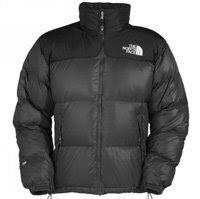 The North Face Nuptse down jacket
While climbing above Camp 1 I used a PHD down suit Omega Down Suit. This is a super warm downsuit, in fact for most of our summit day I wrapped the arms around my waist as it was too warm!

PHD down suit Omega Down Suit
Fleeces and soft shell
I use a fairly typical layering system starting with a long sleeved baselayer Berghaus LS Tech T, a long sleeved micro fleece Mountain Hardwear Microchill Zip T, a vest fleece Berghaus Spectrum Gilet IA and heavier fleece like Mountain Hardwear Monkey Man jacket.
At lower elevations on the trek into Base Camp I used a lightweight trekking trouser, however as it started cooling off I changed to soft shell Mountain Hardwear Navigation pant.
Recommended gear shops
I purchased my gear from Cotswold Outdoor (where The Mountain Company clients are entitled to a 15% discount) and also Peglers based in Arundel.
For Part Two of "Review of gear and equipment used on a recent expedition to an 8000m peak (Mt Makalu)" ...discussion of rucsacs, shell jacket & trousers, gloves & mitts, stoves, cooking gas, expedition food and communications.
If you enjoyed reading these articles why don't you sign up to The Mountain Company's quarterly e-Newsletter? Click here to sign up and here for our e-Newsletter archive.
Roland Hunter
www.themountaincompany.co.uk
Posted by www.themountaincompany.co.uk at 16:45