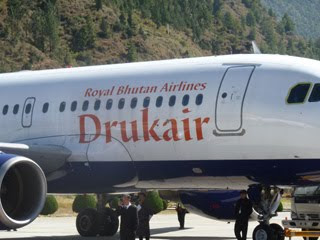 Photo: Druk Air (Royal Bhutan Airlines)
The Mountain Company's 2011 Snowman group had fourteen members with people coming from UK, Germany, Canada, Australia, India, Portugal, Ukraine and Ireland. It is common with our groups to have different nationalities signed up although this was our most international group yet. It is great to have a mix of clients especially on a long trek like Lunana Snowman and this certainly makes for interesting conversations along the way.
I flew by Druk Air (Royal Bhutan Airlines) into Paro on September 22nd to help with the organisation and preparations for the trek before the arrival of the group. It was good to see our Bhutanese crew again especially Dawa (Sirdar) who I had trekked with on our 2008 Snowman trek. Dawa knows the remote Lunana region extremely well having completed Snowman many times including two treks back to back a few years back.
The group arrived to Kathmandu on September 23rd and then flew by Druk Air into Paro on 24th, it was good to finally meet the group after being in touch for so long with everyone on email. After lunch of "Ema Datse" (Bhutanese national dish of cheese and chilies sauce with red rice) we drove to our hotel near Paro. In the afternoon we visited Paro dzong although unfortunately could not go to National Museum as this had been damaged by the recent earthquake. 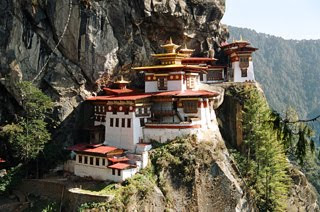 Photo: Taktsang (Tiger's Nest monastery)
On 25th we hiked up to Taktsang monastery (also called Tiger's Nest) this is the famous cultural icon of Bhutan. Guru Rinpoche flew to this location from on the back of a tigress and the gompa was consecrated to tame the Tiger demon. The trail to Taktsang starts outside Paro and climbs about 900m to reach the monastery located at an altitude of 3,120m. Everyone enjoyed the walk and it was good to stretch the legs after travelling for so long.
Today the weather was cloudy with some rain and we were hoping the weather would clear for flights to land at Paro airport later in the day. This is because one member was still waiting for his trek bag to arrive after being held up in London. In Nepal my partners Tulsi and Prashant did a great job collecting the missing bag on arrival to Kathmandu and then later in the afternoon, when the visibility had improved at Paro airport, the Druk Air flight landed at Paro . Now everyone was ready and looking forward to starting the trek! 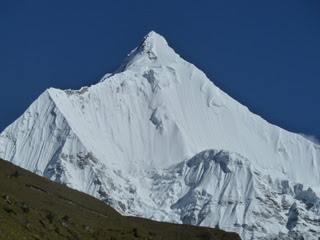 Photo: Mount Jitchu Drake
Selecting the right time of year is essential for improving ones chances of successfully completing the Snowman trek. The crux of this trek is getting in and out Lunana before the winter snows close the high passes (Karchung La and Gophu La both over 5,000m) guard the entry and exit of this remote valley. There is a narrow weather window between the end of monsoon and onset of the snows that will block the passes. As this is a long trek at 28 days there is a tradeoff by starting at end of September where it is quite likely the first few days will be rainy however this means we should be out of Lunana before the onset of winter snows.
I was well aware that when I completed my first Lunana Snowman trek in September/ October 2008 that our group was fortunate with the weather and conditions. Since then I have read numerous read accounts of groups who a attempted this trek in other years where there was far more snow making crossing of the passes more challenging and in some cases impossible for pack animals to continue due to the depth of snow.
On 2008 Snowman we experienced rain for the first day of the trek at the tail end of the monsoon and then very fortunate to get clear weather for the next 27 days! Again in 2011 we experienced a very similar weather pattern with one day of rain at the start of the trek and then settled and stable weather for rest of the time. There was some light snowfall overnight towards the end of the trek at Mischugang and Worithang however this snow soon melted after the sun came out in the morning. 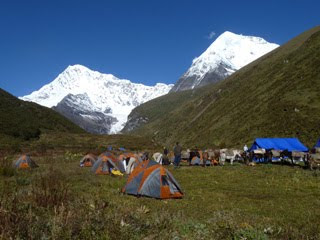 Photo: campsite at Lingshi
In terms of itinerary we organise the complete Snowman trek from Paro to Bumthang. There are very few other trekking operators that run the complete Snowman trek as most groups take the shorter exit route from Lunana down the Nikka Chuu valley. In fact we had two people in our group who had already done this shorter version of Snowman and came back again to Bhutan to do it properly! It was very interesting to hear their views on the differences between the two Snowman treks, they both confirmed that the longer Snowman to Bumthang is far better and includes the best days of the entire trek such as Tshorim Lake, Gophu La, Phorang La & Saga La, Dur Tsachu hot springs and the Djule La pass.
There is also an increasing number of trekking companies that are shortening the Snowman by walking from Punakha to Laya then attempting to cross Karchung La pass into Lunana. This itinerary reduces the number of days and therefore cost of the trek however this is risky as there is simply not enough time to acclimatise to the high altitude before crossing Karchung La into Lunana. We met several groups following this itinerary where members had to turn back with altitude sickness and also several others who were rescued by helicopter later on in the trek due to combination of exhaustion and altitude sickness (also by pushing hard like this people are more susceptible to getting sick from chest infections etc). 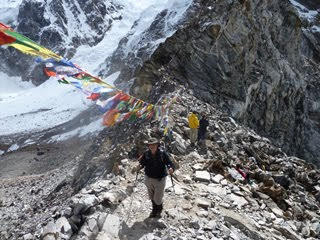 Photo: on summit of Karchung La (5,240m)
In terms of logistics the crux for organising the Lunana Snowman trek is to arrange the animal transport in advance and work with reliable contractors. We had four changeovers of pack animals: first from Paro to Chomolhari BC; then to Laya; then to Thanza and finally at Dur Tsachu to Minchugang. It is also important to consider whether to use yaks or horses, in fact these days more groups are relying on horse transport mainly because they are faster than yaks. However yaks are stronger and are able to cross high passes even if there is some snow that would make the trail impassable for horses. We decided to use horses on three sections of the trek and use yaks for the section from Thanza to Dur Tsachu where there are several high passes to cross.
Many groups hope to find yaks on arrival to Thanza in Lunana however this is a risky strategy as the yak herders from Lunana are not reliable and often groups wait up to a week to find animal transport. The main reason is because the Lunaps make serious money picking Cordyceps Sinesis ("caterpillar fungus") over the summer, these are sold to the Chinese as herbal medicine and is worth more than per kg than gold! As a result the yak herders are not very interested in working with trekking groups to make money and also at the same time do not like to take their yaks out of Lunana valley in case earlier snows block their return journey.
Dawa had arranged to use yaks on the section from Thanza to Dur Tsachu however had made an agreement with a yak herder living near Dur Tsachu. This meant that the yaks were heading on homeward direction with our group. The contractor was same one we used in 2008 and is reliable although I was still relieved to see the yaks arrive a day early on our rest day on Thanza!
I was very surprised to meet another group who were hoping to find yak transport and local Lunap guide on arrival to Thanza however not unsurprisingly they were unable to find either yaks or guides so were forced to continue onto Bumthang with their Laya horsemen. The problem for this group was that none of their crew including their horsemen had ever walked on the trail from Thanza to Bumthang so they had no idea where to go! The trail is not very obvious in places so it is essential to check before departure that your guides, cooks and yak/ horseman have previously walked this way before. 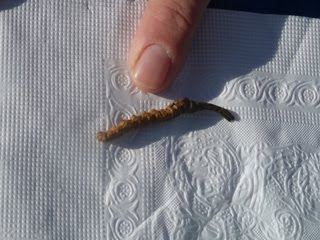 Photo: cordyceps sinesis ("caterpillar fungus")
On October 27th day we arrived to Minchugang at the road head and after celebrating everyone's achievement of completing one of the most challenging treks in Himalaya we thanked our Bhutanese crew for their help during this long trek and handed out their tips. Our bus was waiting for us so we drove onto Bumthang and checked in at the lovely Swiss Guesthouse, everyone enjoyed staying here with their friendly hospitality, good food and beer (Red Panda weissen beer on tap)- for more information on Swiss Guesthouse 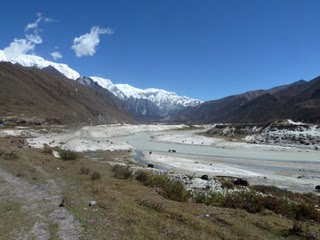 Photo: Lunana
Lunana Snowman is one of the most challenging treks in Himalaya due to the logistics involved, it is also one of the most beautiful trek visiting a remote area rarely seen by other trekking groups especially if you follow the longer exit from Lunana to Bumthang. Of course Lunana Snowman is a long trek and expensive to join however it is a very special place to visit summarised well by Mark one of the members of our 2011 Lunana Snowman trek- see his comments below:
"The Lunana Snowman trek in Bhutan was for me a dream fulfilled that transcended the magical. Yes - it was long and challenging but now indelibly etched on my mind as the most beautiful place I have been privileged to visit. The highlights were....Karchung La....the rest day in Thanza......Tshorim Lakes....Saga la (surprisingly for me)....simply stunning... and inevitably the Swiss Guest House! Superb leadership by Roland; a master logistician and outdoorsman.....an absolute gentleman." Mark Simmonds 2011 Lunana Snowman trek

On a personal level I felt incredibly privileged to have the opportunity to walk the Lunana Snowman trek for the second time and also was proud of the groups' achievement with all fourteen members of the team completing the trek. There are few other trekking companies who have successfully organised the complete Snowman on more than two occasions.

Of course none of this would be possible without our wonderful Bhutanese crew who worked very hard and looked after us well throughout this long trek. Kahdinche (Bhutanese thanks) to Dawa (Sirdar), Tashi (guide), Tsering (guide), Tenzing (cook) and helpers Karma, Pema, Dogguy and Nima. Many thanks also to Kinley Tshering and Wangmo based in the office in for all their help organising the logistics of this trek.

Lunana Snowman trek is now part of The Great Himalaya Trail ("GHT"), this is a trek crossing the Himalaya from Arunchal Pradesh in India through Bhutan to Nepal, India and Pakistan.

Yesterday I uploaded to TMC blog a selection of photos from 2011 Snowman trek please click here to view these photos. I also wrote a brief report on 2011 Snowman trek shortly after return so I suggest you also read this report.

If you are considering joining the Lunana Snowman trek in the future then I suggest you read a book by Kevin Grange called Beneath Blossom Rain: Discovering on the Toughest Trek in the World and also well worth reading : A Trekker's Guide (Cicerone Guide) by Bart Jordan. This is the best guidebook currently available for trekking in Bhutan and covers most of the Snowman trek.

The Mountain Company is planning to organise our Lunana Snowman trek in September/ October 2012 (dates:September 21st to