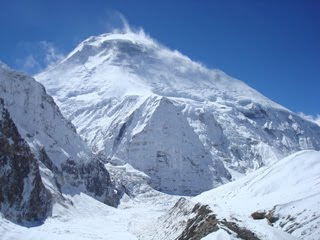 It was interesting to see the differences in the conditions and weather between my two treks around one in late Spring season and the other in Autumn. As is typical in May one generally gets clear mornings then cloud tends to build from mid morning then clears off again in the evening. However in October once the stable post monsoon weather has set in with high pressure across the Himalaya then one can have blue skis and views all day, this is the weather we experienced this October crossing French and Dhampus Passes. Although the weather is more stable in October the advantage of going in May there is likely to be fewer other trekkers around and also you will see mountaineering expeditions at Dhaulagiri Base Camp.

However this year there was a heavy monsoon that extended into October, and as a result we had several rainy afternoons and evenings while walking up Myagdi valley. In fact this valley is known as being wet as the orientation is north to south with clouds travelling up from India then collide with Dhaulagiri at the top of the valley causing high levels of precipitation. The Myagdi valley is clearly a rainy place with sub tropical forest up to Sallighari camp.

Once crossing into one enters an area affected by the rain shadow of with sparse vegetation comprising isolated patches of moss and grass. Like Dolpo further to the west it is only during the monsoon season from June to September that this area gets significant amounts of rain and at this time yaks are brought up to graze in Hidden Valley.

The condition of was far easier to cross this October compared to May with a well established trail in snow with no icey sections and in fact in the end most of the group did not need to use their crampons and ice axes. However when I crossed Dhampus Pass in May there were several icey sections on the traverse after descending from the summit of the pass and with these conditions crampons were essential for trekkers and of course for all of the crew.

The other main difference I noticed compared to May 2008 was the improvement in the trail, in particular the path before Boghara village has now cut into the rock whereas before there was just a fixed rope to help climb over a rock slab! Beyond this village there are several other sections of the path that have been widened making the walk easier than before. The other challenging section is the descent down the lateral moraine from Italian Camp down onto the glacier, for the first time a trail has been cut into the moraine however we still felt a rope was necessary to secure the safe passage of the group and porters. Also several of the old log bridges have been replaced with well constructed cantilever bridges, in fact it is now possible to use mules to carry loads all of the way to Italian Base Camp.

I was surprised that most other groups on the Dhaulagiri Circuit were still ascending way too fast and breaking all of the rules of acclimatisation with most other people we met complaining of headaches and other symptoms of altitude sickness. Of course one has to consider the entire trekking team including the health of all of the porters and kitchen crew as they are the ones working hard at these altitudes! The main consideration on this trek is the risk of someone getting serious altitude sickness in , if this happens then one has to ascend either French or Dhampus pass in order to descend in altitude.

Our acclimatisation schedule seemed to well by spending two nights at Italian Camp (3,660m), two nights at Glacier Camp (4,200m) and two nights at Dhaulagiri Base Camp (4,700m) then we crossed into where we also spent two nights. For most people the highlight of the trek was the day exploring and spending two nights here would not have been possible if the group and crew were not sufficiently acclimatised- click here for photos of our day walk in Hidden Valley.

Our October 2010 group were very lucky as the weather cleared on the morning before we walked into staying sunny and clear for the rest of the trek, we experienced classic Autumn trekking with superb views of , Annapurna, Nilgiri, and Tukuche- click here for photos of Dhaulagiri Circuit trek from October 2010

Congratulations and well done to everyone in our October group for completing this trek! My view is that in spite of the improvements in the trail and construction of new bridges Dhaulagiri Circuit is still one of the hardest treks in Nepal and careful planning and preparations are required to ensure the safety and well being of the group and trek crew.

The Mountain Company is organising two Dhaulagiri Circuit treks in 2011, one starting in late April and the second departure starting in mid October, please get in touch if you are interested in joining one of these groups.

Thanks Roland - good write up