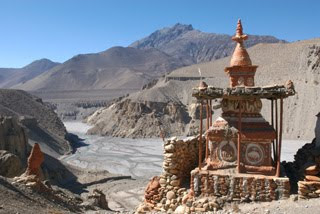 Photo: Upper Mustang
In September '08 Alan Ward led a group for The Mountain Company to Upper Mustang in Nepal. I have copied Alan's description of this fascinating region below:
"The Kingdom of Mustang is located at the northern end of the Kali Ghandaki Valley, the world’s deepest gorge which, at it’s southern end lies between the spectacular peaks of the Niligiri Range (7,055m – 7,134m) and Dhaulagiri (8,167m). At an average altitude of 4,000m the Kingdom is geologically and culturally part of the Tibetan Plateau and has an arid and dry landscape with colourful rock formations containing thousands of long abandoned cave dwellings.

Trekking groups were first allowed into this restricted area in 1992 with the government charging for special area permits. In recent years, only about 1,000 visitors reach Lo Manthang, the capital and this has resulted in the Tibetan culture being largely undisturbed. The trekking routes were used by salt caravans crossing from Tibet into Nepal and settlements are few and far between. Mustang became an independent kingdom in 1380 and the current royal family can trace their lineage back to this date. During the 1960’s, the Tibetan Khampa guerillas, trained and funded by the CIA, used Mustang as their stronghold against Chinese oppression in Tibet."

The highlight of the trek is visiting Lo Manthang, the capital of Upper Mustang, as described below by Alan:

"Everyone was looking forward to reaching Lo Manthang, capital of Mustang, the last forbidden kingdom. Crossing a level plain to the last climb up to the Lho La (3,950m) was a relief to all as we finally saw Lo Manthang beyond the cairn and prayer flags at the pass. Before long we were enjoying lunch at the Hotel Mystique, our lodge and camp site for two nights.

Our camp site was just in front of the lodge and looked eastwards towards the colourful Thakla Danda and Rijopuwa Danda mountain ranges. Our tour didn't take too long as Lo Manthang isn't a large settlement but we found two gompas and the teaching school interesting. During the afternoon we were granted a royal audience with the King of Mustang.

Being in Lo Manthnag was like going back in time. The only water supply seemed to be in the main square where women were washing clothese and men were filling water containers before disappearing down narrow alleyways to houses beyond the square.

The afternoon was spent at leisure with some of the group relaxing in camp whilst others continued wandering around the walled city."

The Mountain Company is planning on organising another Upper Mustang trek in September '09, please get in touch if you are interested in joining the group. For more information please take a look at the Upper Mustang webpage
Posted by www.themountaincompany.co.uk at 17:41