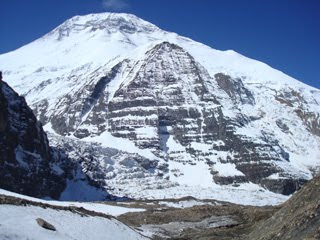 Photo: Mount Dhaulagiri see from French Pass
In April this year The Mountain Company organised our fourth trek around Dhaulagiri Circuit. I led our first Dhaulagiri Circuit group in May 2008 then Gary Pfisterer was the leader in October 2009 and I led another group in October 2010. I have copied the links below to previous trip reports written on this blog:
Dhaulagiri Circuit trek in May 2008 led by Roland Hunter
Dhaulagiri Circuit trek in October 20010 led by Roland Hunter
In April we had nine people in our Dhaulagiri Circuit group and this trip was led by Lee Farmer and their Nepalese Sirdar was Jhire Rai. Lee is an Everest summitter and also a qualified International Mountain Leader.
Everyone arrived to Kathmandu on April 24th then flew to Pokhara on 25th to start the walk that afternoon after meeting the crew and having lunch in Beni. At this time of year the first few days are always hot and humid however of course the temperatures cool off at higher altitudes. We have chosen the best time in the Spring season for this trek, by starting in the last week of April means that the group will cross Dhampus pass on May 7th and French pass on May 9th. From our experience this is the optimal time to increase chances of crossing these high passes as weather is usually settled and temperatures warmer compared to March and April.
As it turned out this group experienced good weather and conditions for both days crossing French and Dhampus passes. As is usual in Spring the trail over Dhampus pass is icier and more slippery than in October, Lee decided that the group should put on crampons below Dhampus Pass and kept them on for all of the snow traverse to above Yak Kharka. In fact there was even one section of fixed rope on descent of Dhampus pass placed by a Czech team climbing on Dhampus Peak who kindly allowed our group to use for extra safety and security. This contrasts to when I led this trek in October last year when we put on crampons at top of Dhampus pass however most people took them off again shortly afterwards as were not really required for extra security on the traverse. It is essential that everyone in the group (and also crew and porters) bring crampons then make the decision whether to put them on while on trek.
We have received good feedback from the group about this trek, as explained in our Trip Dossier this is a tough and challenging trek however it is an achievable objective for fit hill walkers. One of the reasons we send a western leader for Dhaulagiri Circuit is to provide training and instruction on basic mountaineering skills as most people booked onto this trek have never used crampons and ice axe beforehand.
Lee gave an "Ecole De Glace" training session at Dhaulagiri Base Camp where he showed the group how to fix crampons to their boots properly and then demonstrated techniques for walking with crampons such as duck walking, front pointing and hybrid style. Then Lee discussed the use of an ice axe by demonstrating self belay and self arrest. After this demonstration everyone had a chance to practice these techniques. From discussion the group after this session everyone felt confident they had the right skills to safely cross the high passes on the Dhaulagiri Circuit.
This was the first time that Lee had completed the Dhaulagiri Circuit trek and his comments on the trek were as follows:
"I thoroughly enjoyed this trek- high and wild. It was a great immersion into a more remote part of Nepal. It was good working with the team I had and all worked very hard. Tulsi and Prashant in Kathmandu were excellent and very organised and the sherpa team of cooks and porters were very good and I particularly liked working with the Sirdar Jhire Rai."
As ever I would like to thank the trek crew for their work on this trek as we would not be able to visit this amazing area of Nepal without them! Of course thanks also to the leaders Lee Farmer and Jhire Rai.
The Mountain Company is organising Dhaulagiri Circuit trek in October 2011 and also April 2012 please get in touch if you would like to join one of these departures. Our October 2011 trek is now guaranteed to run and there is currently availability, this trip will be led by Dom Rudd. Our April 2012 Dhaulagiri Circuit trek will be led by regular Mountain Co leader Alan Ward.
Roland Hunter
www.themountaincompany.co.uk
Posted by www.themountaincompany.co.uk at 08:34