Trekking from Helambu into Langtang via Laurebina La pass and Gosainkund

Namaste and Happy New (Nepali) Year! It is now year 2067 in Nepal, there were big celebrations last night in Kathmandu. I just got back after a trek from Sundarijal on the outskirts of Kathmandu through Helambu over Laurebina La passing Gosainkund lakes and into the Langtang valley. Early April is a good time of year to do this trek as the rhododendrons are in full bloom with white, pink and red flowers covering the hills. Now I understand why laliguras (Nepalese for rhododendron) is their national flower!
The drawback of trekking in the middle hills of Nepal during this time of year is a the presence of a thick haze that obscures the views however once over 4,000m one rises above this and the mountain views from Laurebina La were superb (see photo). Certainly the views would be clearer during the period October to January although of course the rhododendrons would not be in flower at that time, as ever there are pros and cons of trekking for each month in Nepal. 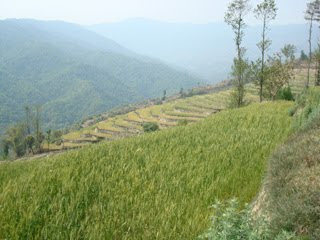 Photo: terraced field in Helambu
We approached this trek in a reverse direction to most itineraries including The Mountain Company's Langtang and Laurebina La trek i.e most people start from Langtang then head over Laurebina La into Helambu and walk back to Kathmandu whereas this time we walked the other way from Kathmandu into Langtang. In fact I think both directions work well for this trek, of course either way it is important to be sufficiently acclimatised before crossing Laurebina La at 4,700m.
Our Kathmandu to Langtang itinerary seemed to work well as everyone felt strong going over Laurebina La and no-one had any headaches throughout the trek. I was conservative with the time acclimatising before the pass by spending one night at Magin Goth (3,200m), next at Tharepati (3,500m) followed by Phedi (3,700m) and then next day crossing Laurebina La. 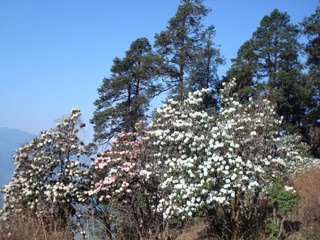 Photo: rhododendrons in flower
On leaving Magin Goth on the trail to Tharepati we met a Sherpa family walking back to Kathmandu after having spent their easter holidays with relatives at Kutumsang village. We walked together chatting about how life differs living in Kathmandu compared to the village. On the way the father of the family pointed an interesting shaped rock and explained how this was formed when Guru Rinpoche kneeled on this spot and meditated. At this point they asked if I would like to join in their puja ceremony, the father chanted mantras and gave everyone some rice to throw over the rock. It was a lovely experience and without meeting this family we would have wandered past without knowing how important this particular rock is! 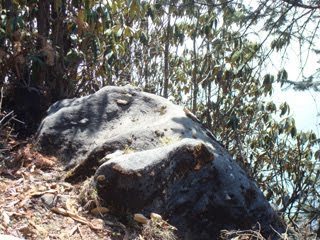 Photo: Guru Rinpoche's rock
In December 1991 James Scott a 22 year old Australian medical student attempted to cross Laurebina La however subsequently become lost for 43 days with only a couple of chocolate bars for sustenance. At this time of year sudden winter storms can happen at this altitude, and this is what happened as James approached the pass and at the time decided to turn back by himself. He followed the drainage hoping to get to Talu village however soon was unable to proceed due to a steep waterfall and after a while found shelter under a narrow rock ledge. For the full story take a look at this article on Explorersweb, you can also buy his book recounting what happened from our Amazon store take a look at "Lost in the Himalayas: James Scott's 43 day ordeal"
Another event occurred in this area on July 1992 when Thai International flight 311 crashed close to Phedi below Laurebina La sadly killing all 113 people on board. There is now a chorten next to the teahouse lodge at Phedi in remembrance of a Japanese passenger who was on this flight. For more information about this accident and what went wrong take a look at this page on Wikipedia
Our day crossing Laurebina La and walking past Gosainkund lakes was definitely the highlight of this trek, luckily the weather was good and at that altitude we were above the haze as mentioned earlier in this article. The Gosainkund lakes are a pilgrimmage site for Hindus during the summer months. The lakes are said to have been formed by the digging of Lord Shivas' holy three pointed sword known as a Trishul after he drank the poison from Samudramanthan in order to get some cold water to quench the heat of the burning poison. The Gosainkund lakes are the source of the Trishuli river that flows through Nepal. 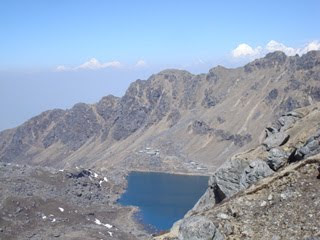 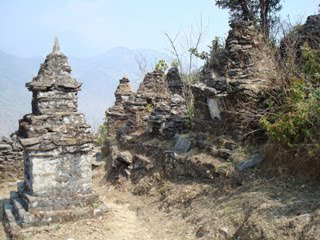 Photo: old chorten above Bharku village
Once we trekked past the Gosainkund lakes we walked into the Langtang valley, the villages here are inhabited by Tamangs whereas on the Helambu side the higher villages such as Kutumsang are Sherpa. Tamangs came from Tibet about 500 years ago and still follow Tibetan Buddhism. The villages in this area are well known for the intricately carved wooden window frames. 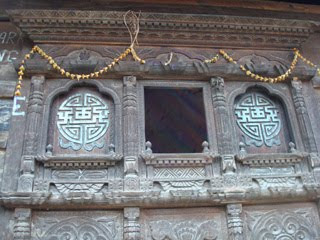 Photo: carved windows at Bharku village
If you are interested in seeing more photos of this trek please take a look at our Facebook photo Album "Helambu to Langtang".
Please get in touch with us if you are interested in joining this trek or would like any information, take a look at our website for our Langtang and Laurebina La itinerary and Trip Dossier
Roland Hunter
www.themountaincompany.co.uk
Posted by www.themountaincompany.co.uk at 02:54