Trip report for Dhaulagiri Circuit May '08 led by Roland Hunter

Roland led a reconnaissance trek around the Dhaulagiri Circuit in late April 2008. We wrote briefly about this trek in our Blog post TMC pre-monsoon ‘08, however since then we have received a lot of interest with people asking for more information. Therefore, we are now writing a full Trip Report that hopefully will answer some of these questions about the Dhaulagiri Circuit trek.

This trek has the reputation for being one of the most difficult in Nepal, I suggest you take a look at these external links for further background on the challenges involved: 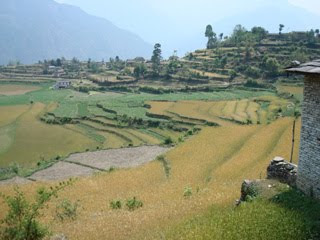 Photo: terraced fields near Muri village
Having completed the Dhaulagiri Circuit with a group last year I thought that it was one of the best that I have done in the Himalayas.
This trek visits a remote area where there are few other trekkers, this is becoming increasingly rare in Nepal these days. At the beginning of the trek the trail passes through beautiful Gurung villages with views of the Dhaulagiri massif, then above these villages it follows a rough trail to the Italian BC.

Above Italian BC the trek is a an alpine experience walking along moraine covered glaciers to the main Dhaulalgiri BC then over the French pass to the beautiful Hidden Valley. The toughest day is crossing the Dhampus pass, with a long traverse on icy slopes before finally descending to Marpha and the busy trails of the Annapurna Circuit. 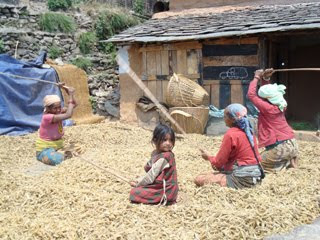 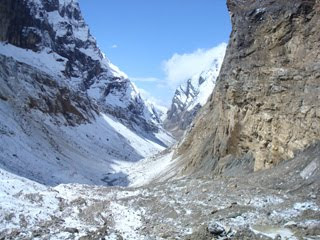 Photo: Chonbarden gorge
I have discussed the main challenges of the Dhaulagiri Circuit and the ways we organise this trek to minimise these risks:

1) Lack of sufficient acclimatisation as a result of a rapid ascent between Italian BC (3,660m) and Dhaulagiri BC (4,700m) and from there to Hidden Valley (5,050m). Most trekking groups on “standard” itineraries go from Italian BC to Dhaulagiri BC in one day, this is a 1000m increase in altitude is significantly more than the recommended increase in altitude gain per day of 300 to 500m!

The Mountain Company has developed our itinerary to include two extra nights between Italian and Dhaulagiri BC. First of all we spend two nights at Italian BC then move up to spend the night at French BC at 3,870m (placement of the camp is important as there is some risk of rockfall). The next day we move to Glacier camp and spend the night at 4,200m, then continue to the main Dhaulagiri BC the following day.

In the Hidden Valley one camps at over 5,000m, if anyone gets altitude sickness you are in a potentially serious situation because you can only get to a lower altitude by climbing up over high passes.

To minimise the risk of altitude sickness in the Hidden Valley we recommend groups spend three nights at Dhaulagiri BC, this combined with the cumulative benefits of trekking slowly from Italian BC means people should be well acclimatised for the Hidden Valley. However, it is important that the leader carefully monitors the trekkers and crew and to turn people back if not sufficiently acclimatised.

It is essential they are provided with porter tents, walking boots, sunglasses, down (insulated) jackets, wind & waterproof jackets & trousers, gloves, hats etc. This is the regular gear recommended by the International Porter Protection Group (IPPG) in their five guidelines for all treks, take a look at their website at http://www.ippg.net/guidelines

In addition to this equipment it is critical for all porters to be issued with crampons. After the descent from Dhampus pass there is a long traverse for over 3 hours on snow and ice slopes. From previous experience the Nepalese made crampons are not sufficient so at The Mountain Company we provide Edelrid 6 point crampons to all of our trek crew 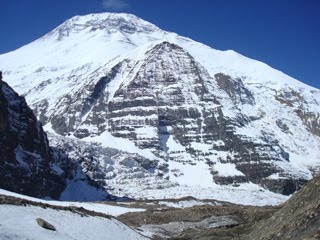 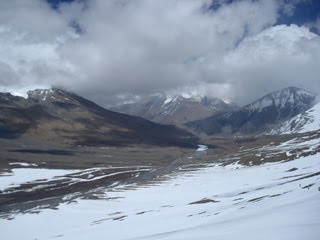 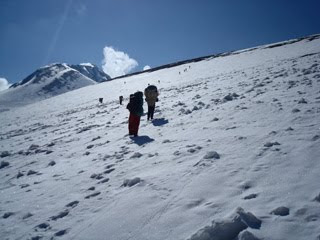 Photo: approaching Dhampus pass
3) There is a risk of the French or Dhampus pass being blocked by snow and impassable for a trekking party. You can minimise this risk by selecting the optimal time of year to undertake this trek. In my view there are two times of year when you have a reasonable chance of completing this trek: late April and mid October.

There are advantages & disadvantage of both of these dates, during the pre monsoon season the temperatures are warmer meaning the night in the Hidden Valley will be more comfortable for trekkers & crew. More importantly it means that the snowline is higher and with the ground temperature warmer any fresh snow is likely to melt off quite fast. In post monsoon season, by the time you cross the passes in/out of Hidden Valley the temperatures will be dropping as winter approaches. If there are early storms the snows will most likely block the passes for a while.

The main advantage of post monsoon is that the weather tends to be more stable with better views of the mountains and normally settled sunny conditions. In the pre monsoon season there is often haze lower down and at higher altitudes clouds usually build up each day followed by afternoon convective precipitation. However the clouds usually clear over night to reveal blue skies by the morning.

Also there are likely to be more groups undertaking this trek in the post monsoon season so there will be other trekkers around, however it will be much quieter than most of the other trekking destinations in Nepal. In May ’08 during the whole trek we only met one other group of 5 or so people along the way and then a few expeditions at BC.

4) If you have only been trekking in the Everest or Annapurna regions with their well constructed trails and bridges then you will find the Dhaulagiri Circuit trail far more challenging! There is one section before Boghara village where the trail is very exposed with rope to pull yourself up a rock slab! However, it is possible to walk around this difficult section by taking a high route on a spur above but even here the trail is exposed and could be slippery on a wet day.

After Italian BC there is a very steep section down the lateral moraine onto the glacier. It is best to fix some rope at this point to secure the descent especially for the porters. There are a number of other sections where the trail crosses landslide zones. Due to the low numbers of trekkers and locals walking the trail it is unlikely repairs would be made very quickly after a fresh slide. You should be prepared for adventurous scrambling as well as having a rope handy just in case required! From Boghara village the bridges are of a basic construction often a just tree trunk over a river.

In summary.... without doubt Dhaulagiri Circuit is one of the great Himalayan treks. Hopefully this trip report explains the main challenges involved and the way The Mountain Company organises the planning and logistics to increase the chance of safely completing the trek.

George, one of the members of our trek last year, summarises his experience on the Dhaulalgiri Circuit:

"Dhaulagiri was great. The days from arrival at base camp, over Hidden Valley, and down to Marpha were outstanding and I will always remember them. Thanks very much for arranging it. It was all quite an adventure." George Muir, Dhaulagiri Circuit May 2008