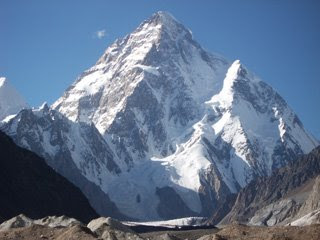 Photo: K2 as seen from Concordia

The August '08 K2 & Gondogoro La group have just returned from Pakistan. This year we certainly had our share of good luck with no landslides blocking the Karakoram Highway (KKH) or Skardu to Askole road as well as having great weather for most of the trek.

To top it off we flew back to Islamabad from Skardu at the end of the trek. This flight is notoriously unreliable and is often cancelled due to poor weather or lack of available planes. Flying back at the end of the trip saves a two day bus ride on the KKH and means having two nights at our hotel in Islamabad and a chance to do some sightseeing and shopping. 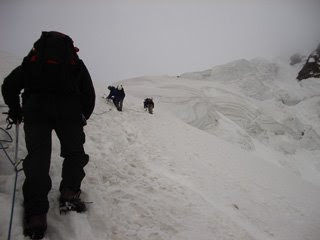 Photo: Climbing up Gondogoro La
This year the Gondogoro La was in a good condition and all of the group successfully crossed the pass. This was especially good news after last summer when a large crevasse blocked the route up the Gondogoro La. Having spoken to the Hushe Rescue Team, who are responsible for maintaining the fixed rope on the pass, there was a large serac fall during the winter that luckily plugged this crevasse.
Roland did a recce of the Gondogoro La the day before the group arrived to Ali Camp (on their rest day after the long day to K2 BC and Gilkey memorial) in order to check the quality of the ropes and anchors. Generally the ropes were in a reasonable condition, however we put in 200m of extra rope secured by icescrews and snowstakes to protect our passage. The Mountain Company donated this equipment to the Hushe Rescue Team (as well as paying the toll to cross the pass) so hopefully will be used in the future to increase the security of other groups going over the pass. 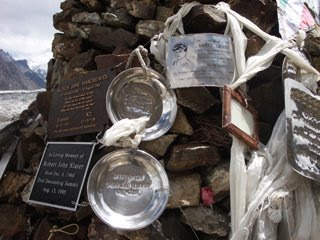 Photo: Gilkey memorial near K2 BC
Roland is planning to return to Pakistan next summer to lead the Snow Lake Biafo and Hispar trek in July and K2 & Gondogoro La trek in August. Please get in touch if you are interested in joining him, his email address is roland@themountaincompany.co.uk
Posted by www.themountaincompany.co.uk at 15:53