Roland recently got back to the UK after spending three months in Nepal during the pre-monsoon trekking season. We had a busy season in Nepal including groups summitting Island Peak & nearly Naya Kanga (100m from the summit!), several successful Everest Base Camp treks and a trek around the Manaslu Circuit followed by Dhaulagiri Circuit.

The season started in early March with a private group going to Poon Hill and Ghorepani where some continued to the Sanctuary and Annapurna Base Camp and others coming back to Pokhara via Ghandrung village.

At the same time our Everest Base Camp and Island Peak group set off for their expedition led by Pemba Tamang. Pemba joined Roland last October as the Sirdar on his Mera Peak expedition. Pemba is an experienced climbing Sherpa having summitted both Everest and Manaslu twice. This group successfully reached Kalapathar, Everest bc and the summit of Island Peak.

In the second week of March five members of Everest Base Camp trek trek flew into Lukla. Having spoken to them on their return to Kathmandu overall they had good weather with great views of the mountains. The whole group got to Base Camp so well done everyone!

Throughout March and April, we organised a number of private treks to the Khumbu using the Everest luxury lodges, as ever they seem to be very popular way of seeing the spectacular Everest region while staying in comfortable lodges each night.

In early April the Naya Kanga expedition set off trekking through Helambu and over the Laurebina La before heading up the Langtang valley to Kianjin Gompa. From there they put in two camps on Naya Kanga before their summit attempt. On summit day the team reached just below the summit although had to make the hard call to turn around due to unstable snow on the final slope.

Following the team's debrief on their return to Kathmandu it was clear they made the right decision, however they had a great time and would highly recommend this trip to others. The trek passes through an area where there are fewer trekkers compared to the busier Everest and Annapurna region and the climb is technically interesting with superb views.

On April 7th the Manaslu Circuit group led by Roland set off for the roadhead at Arughat. The trek went well and as usual our Sirdar, Jhire, did a great job looking after the crew and clients. I would highly recommend this trek which explores a remote area of Nepal passing through a culturally and scenically diverse region of Nepal.

The trek starts at a low altitude (800m) where you will walk through rice paddies with mainly Gurung & Magar villages and then enters the Tibetan Buddhist region over 3000m. The Manaslu Circuit crosses over a high pass called Larkya La which is similar in difficulty to the Thorong La on the AC. This is a spectacular day with incredible views, it is challenging but a good objective for most fit walkers. 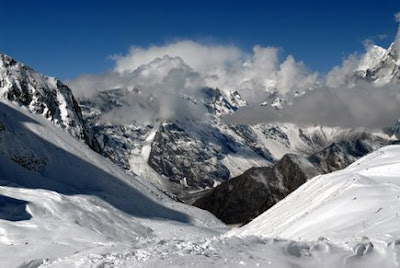 Photo: Larkya La on Manaslu Circuit
After a quick turnaround after the Manaslu Circuit, Roland set off for his next trek on the Dhaulagiri Circuit on April 26th. This was a reconnaisance trek to work out the best itinerary, as some of you have probably read this has a reputation as one of the toughest treks in Nepal!

This also means it is essential to equip the porters and crew well. At The Mountain Company we provide porters with walking boots, crampons, wind & waterproof jacket and trousers, down jacket, down sleeping bags, mats, gloves, warm hat, sunglasses and tents. In fact, I notice that some of them had better gear than I had!

The biggest challenge to successfully completing this trek is to spending enough to acclimatise to the altitude. Most groups push from Italian Base Camp at 3,660m to main Base Camp at 4,700m in one day!! In fact there was one other trekking party who followed this itinerary when we were there and the next day one client got severe AMS and was forced to descend and finish her trek.

On The Mountain Company itinerary we have included two nights in our itinerary from Italian Base Camp to main Base Camp, one at French Base Camp at 3,870m and the other on the Chonbarden Glacer at 4,700m. We also have three nights at main Base Camp to ensure good acclimatisation for clients and the crew before crossing the French Pass and camping in the Hidden Valley at 5,100m. These extra days can also be used as buffer days in case of delays from poor weather or landslides etc.

Overall, I highly recommend the Dhaulagiri Circuit as a challenging trek in a remote and rarely visited part of the Nepal Himalayas. 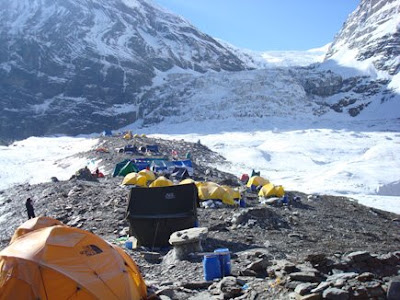