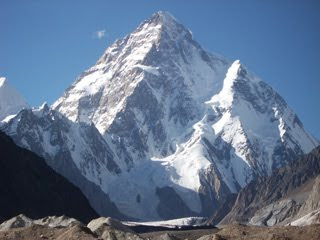 I arrived back to this afternoon after leading The Mountain Company’s K2 & Gondogoro La trek in Pakistan. This year we had a full group of fourteen people and as often with our groups this was an international team with trekkers coming from UK, US, Australia, Greece and Mexico.

The group arrived to on August 6th, this was shortly after the heaviest monsoon rains in for last 50 years causing widespread flooding throughout the country. In fact shortly before departure we were seriously considering whether to cancel however after researching the current situation and discussions with our contacts in . As it turned out we made the right decision as we enjoyed good weather with fine views of and other mountains around Concordia, we even had a beautifully clear day on crossing

When the group arrived to we received reports that Karakoram Highway (KKH) was in poor condition with several landslides and a number of bridges washed away on the Besham to section of the road. There is an alternative road for jeeps that passes through Naran and crosses the having checked the forecasts we felt it would be too risky to drive so we decided to rely on the flight to Skardu. On August 7th we went to airport however by this flight was cancelled, luckily on 8th we finally boarded and successfully landed at Skardu airport.

On arrival to Skardu we heard that bad weather from 7th caused a number of landslides in the region and near to Skardu sadly killed 45 people and in Talis village 13 people perished in further landslides, for further information please take a look at this article

The group stayed at K2 Motel in Skardu, this is located in a safe area however we could clearly see that the river was flowing at a far higher level compared to my last visit in 2008. The next day we planned to drive to Askole however we heard the road was blocked in a number of places so instead we took a rest day in Skardu and sent some of our porters ahead to help repair these broken sections of road. We spent an enjoyable morning at before driving back to Skardu in the afternoon.

The next day we left early in jeeps for the drive to Askole however shortly after Shigar village we encountered a new block on the road where overnight a mudslide had destroyed the road. Everyone in our team as well as several other trekking groups helped by collecting rocks to build the road through the mud slide area. After several hours the jeeps were able to clear the block (with some impressive driving!) and then the group crossed over the river. Further along the road there was one further landslide where we had to swap jeeps then continued our drive to Thongol where we camped for the night.

The next morning we started the trek and after an hour we arrived to Askole, this is the last village on the trek until Hushe on the other side of Gondogoro La. The weather was sunny and very hot so everyone was hopeful the monsoon rains were retreating back south again. We experienced mixed cloud and sun for the next few days and in fact this made the walking very pleasant as otherwise can be very hot at this altitude.

The trek progressed as planned and after our rest day at Urdukas the weather starting to improve further and we enjoyed a memorable lunch at Goro 1 as the clouds dissipated over and by the evening we had clear views of this impressive mountain. We were very lucky as we had clear weather for the next six days while at Concordia and also for the crossing of the

After arrival to Concordia on 19th we discussed the options for the next day, five people decided to make the long walk to K2 Base Camp and Gilkey memorial while the others opted for the shorter walk to Broad Base Camp. As ever it was an emotional visit to Gilkey especially seeing the new memorial and a broken ski from Fredrik Ericsson who died earlier this summer, for further information please see his blog

On 21st the group enjoyed a rest day at Concordia and were blessed with perfect weather and incredibly views of from the mess tent. On that day myself and our local guide Monin from Shimshall village walked up to Ali Camp, then early the next morning we climbed up Gondogoro La to check the condition before the group arrived the next day. We decided to fix an extra 200m of fixed rope on the ascent of the pass to secure the section crossing a crevasse half way up the snow slope. As in 2008 we decided to donate this rope to Hushe Rescue Team.

Shortly after Monin and I got back to Ali Camp the group arrived after their walk up from Concordia, everyone enjoyed this trek as is one of the best days with superb views back to , , group as well as . On approach to Ali Camp the glacial ice underfoot is easy to walk on with few rocks and look impressive with their ice and snow flutings

We decided to leave Ali Camp at in order to ensure we had enough time to cross the pass and descend the other side. It was a beautiful morning with starry skies and nearly full moon illuminating the peaks around. The group made good progress to the base of the pass and by everyone had summited Gondogoro La at 5,550m. As ever the descent is more challenging than ascent and we made steady progress however the unseasonal snow from week before started to melt releasing some rockfall, it was a good thing everyone had helmets for this descent! The recent snow made the rapel down the ropes easier than previous years however on reaching the bottom of the ropes the trail was less established than in 2008.

At The Mountain Company we believe strongly in looking after our porters, we are the only trekking company operating on the Baltoro that provides waterproof jackets and trousers plus walking shoes to our porters. We follow International Porter Protection Group five guidelines in . We do not think it is appropriate for porters to cross Gondogoro La in plastic shoes and cotton shalwar kameez! Please take a look at this YouTube video that shows this gear being given out to our Balti Porters.

Our wonderful cooks and kitchen crew crossed Gondogoro La arrived to our campsite at Khuspang early and then kindly sent up a cooked lunch for us at High Camp, this food was very welcome and gave everyone renewed energy in order to carry on down to Khuspang. The next day we opted to continue our trek down to Shaisho rather than take a rest day. We heard that the bridge below Shaisho had been washed out by the recent rains and instead an enterprising ex High Altitude Porter had rigged a “jhola” or bucket bridge, after carefully inspecting the anchors and the set up we felt confident the group could cross safely and everyone in the group seemed to enjoy this experience of crossing the raging river below!

The next day we walked to Hushe village and then after handing out tips to our fantastic crew we drove to Skardu. The next morning on 26th we tried to fly to Skardu although this flight was cancelled luckily on next day we fly back to .

Overall we had a great trip with perfect weather at Concordia and for crossing Gondogoro La, as ever is a true adventure destination and one needs to be flexible and be prepared for the unexpected! We certainly had our fair share of good luck on this trek and were fortunate weather improved when needed higher up. As ever I would like to thanks our superb Pakistan trek crew for looking after us so well, in particular our local guides Ghulam Hassan and Momin Shah as well as our cook Syed Jhan.

The Mountain Company plans to run our K2 & Gondogoro La trek again in August 2011 so please get in touch soon if you would like to join this group. We also plan to operate our Snow Lake Biafo Hispar trek in July 2011.

Great reading Roland, we really enjoyed the report. Sounds like you guys had some good luck shine on you. I hope the people of Pakistan get some good luck as well soon. Cheers Greg and Em

Great to read your 2010 trip report Roland. I remember my 2007 trip with you - and the drive on the Karakorum Highway - both ways! I'm sure the Pakistani Guides and Porters are pleased that you carried on with your 2010 trip.
Best Wishes - Shirley H. from 2007